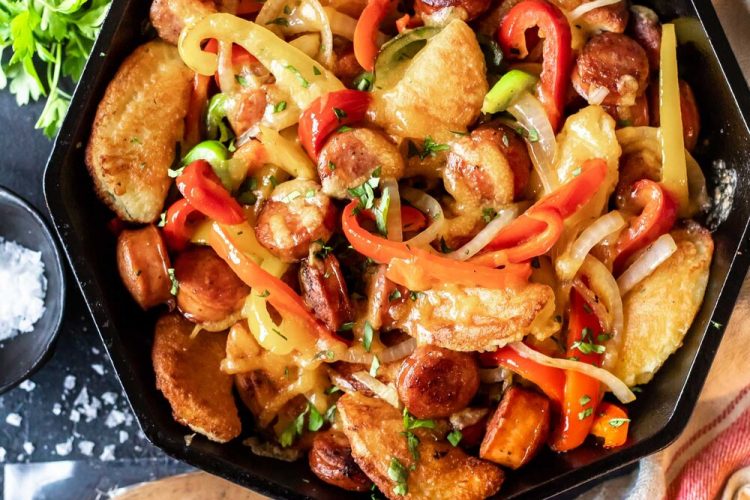 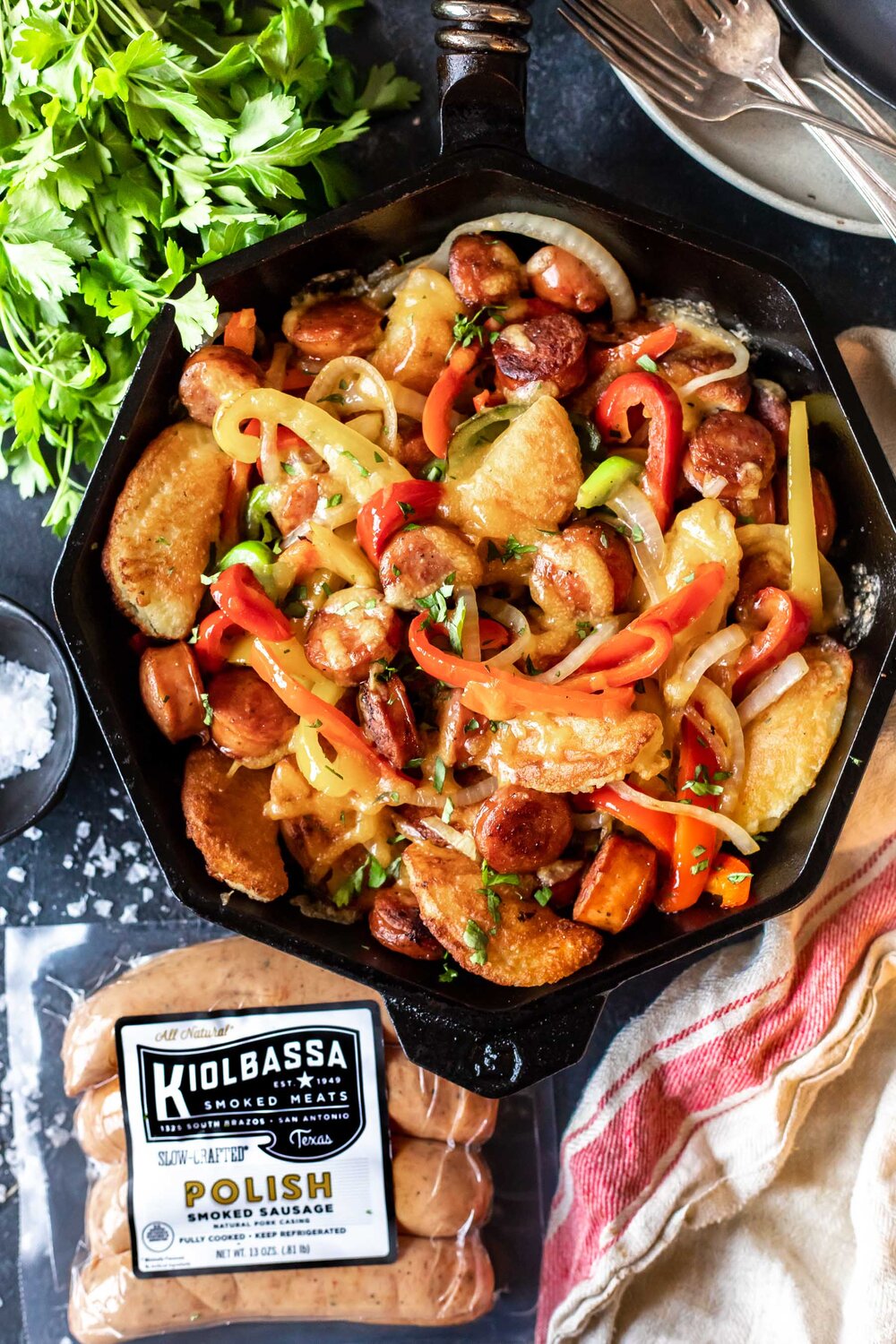 This Keto Pierogi Sausage Skillet is sponsored by our friends at Kiolbassa Smoked Meats, thank you for supporting the brands that make delicious Cast Iron Keto recipes EPIC.

2 words…KETO PIERGOI(!!!) We’re so excited about this Keto Pierogi Sausage Skillet using our favorite All-Natural Kiolbassa Polish Smoked Sausages! This ultimate skillet dinner is packed with doughy low-carb pierogis, the savory smoked sausage, peppers, onions, and cheese. I mean, can you even?

You may look at this and think it’s going to be hard, but I promise that it’s not. The base for the pierogi is actually the dough recipe we used in our recipe for Keto Hot Pockets, the dough holds up perfectly to filling and folding making it perfect for the pierogi stuffing.

To make the Pierogi you’ll roll out the dough between 2 sheets of parchment paper then use a 3” round cutter (don’t fret, a ½ cup measuring cup with work!) to cut the circles out, stuff with the stuffing then use a fork to crimp the edges together making sure they seal so that none of the filling sneaks out.

For the stuffing, we went with a classic seasoned cauliflower mash along with some farmer’s cheese (a crumbly and mild white cheese), and bacon. The result is a crispy on the outside and creamy on the inside pierogi that goes great with the sausage, peppers, and onions.

Kiolbassa’s Polish Sausage is just perfect here. This is a traditional kielbasa sausage with a delicious blend of pork and beef. To add even more flavor to the dish you’ll want to brown the sausage before adding in the peppers and onions.

After cooking that up until your kitchen smells like a state fair, you’ll top it all of with some shredded cheddar cheese and pop it under the broiler for a few minutes to get nice and bubbly hot. 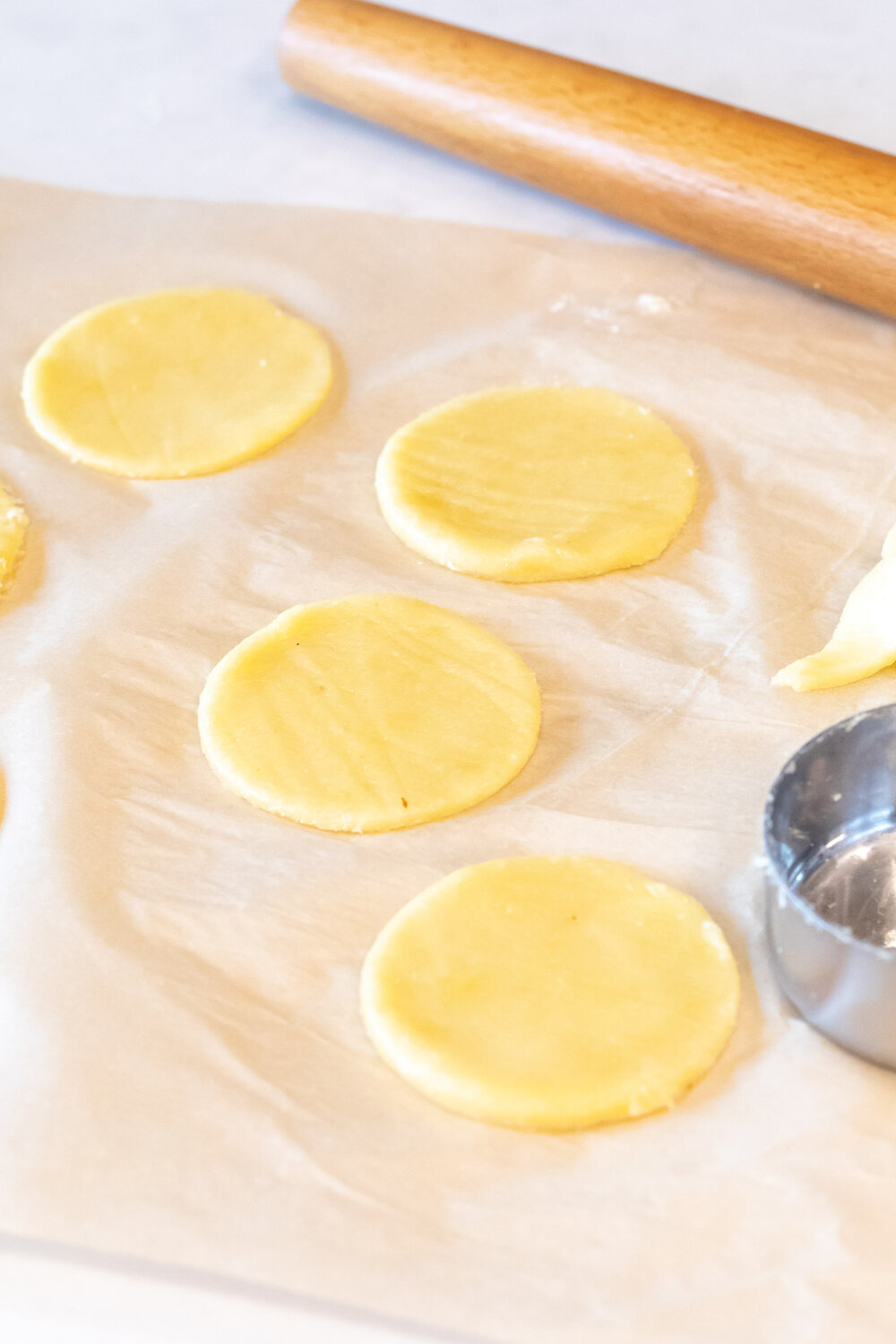 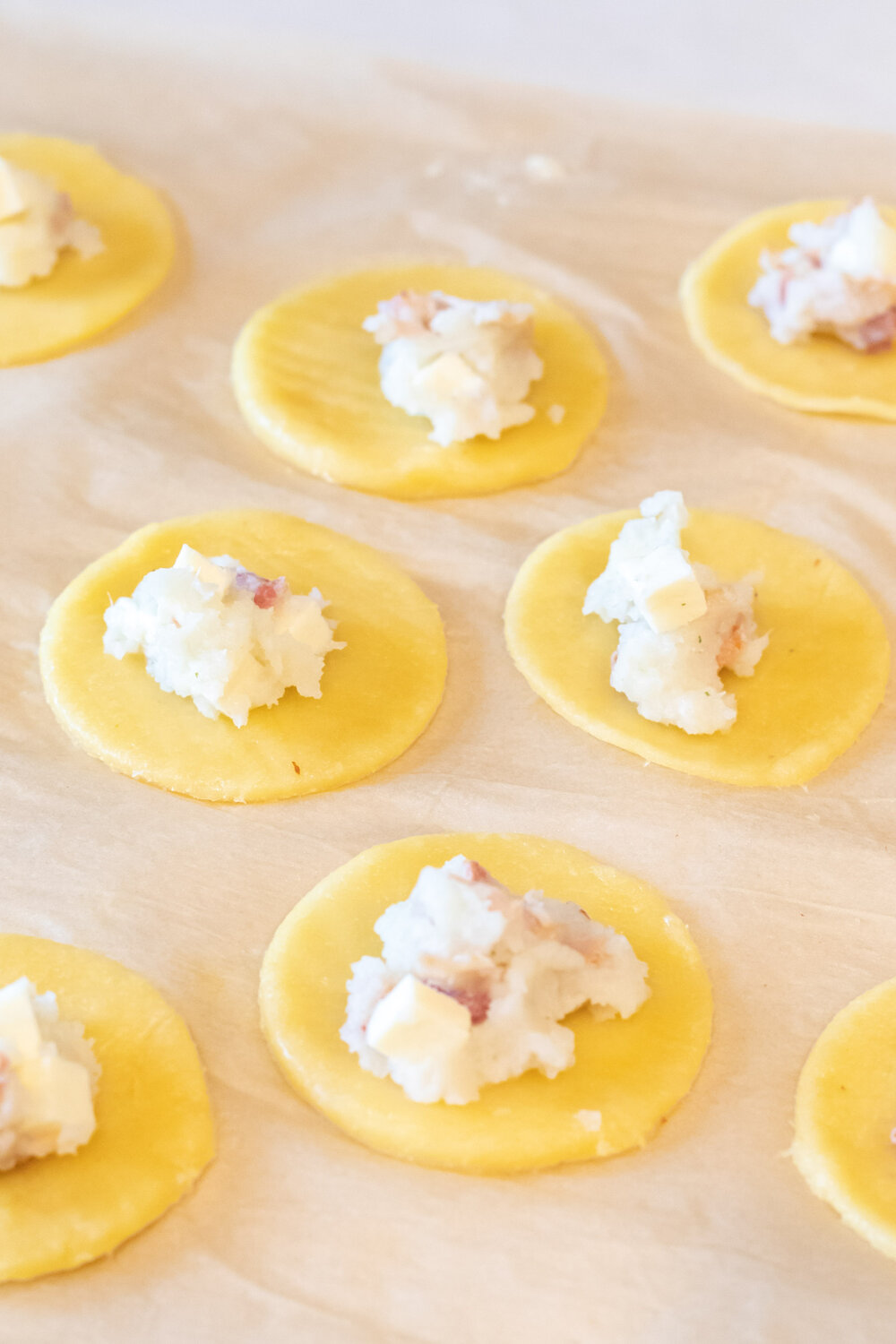 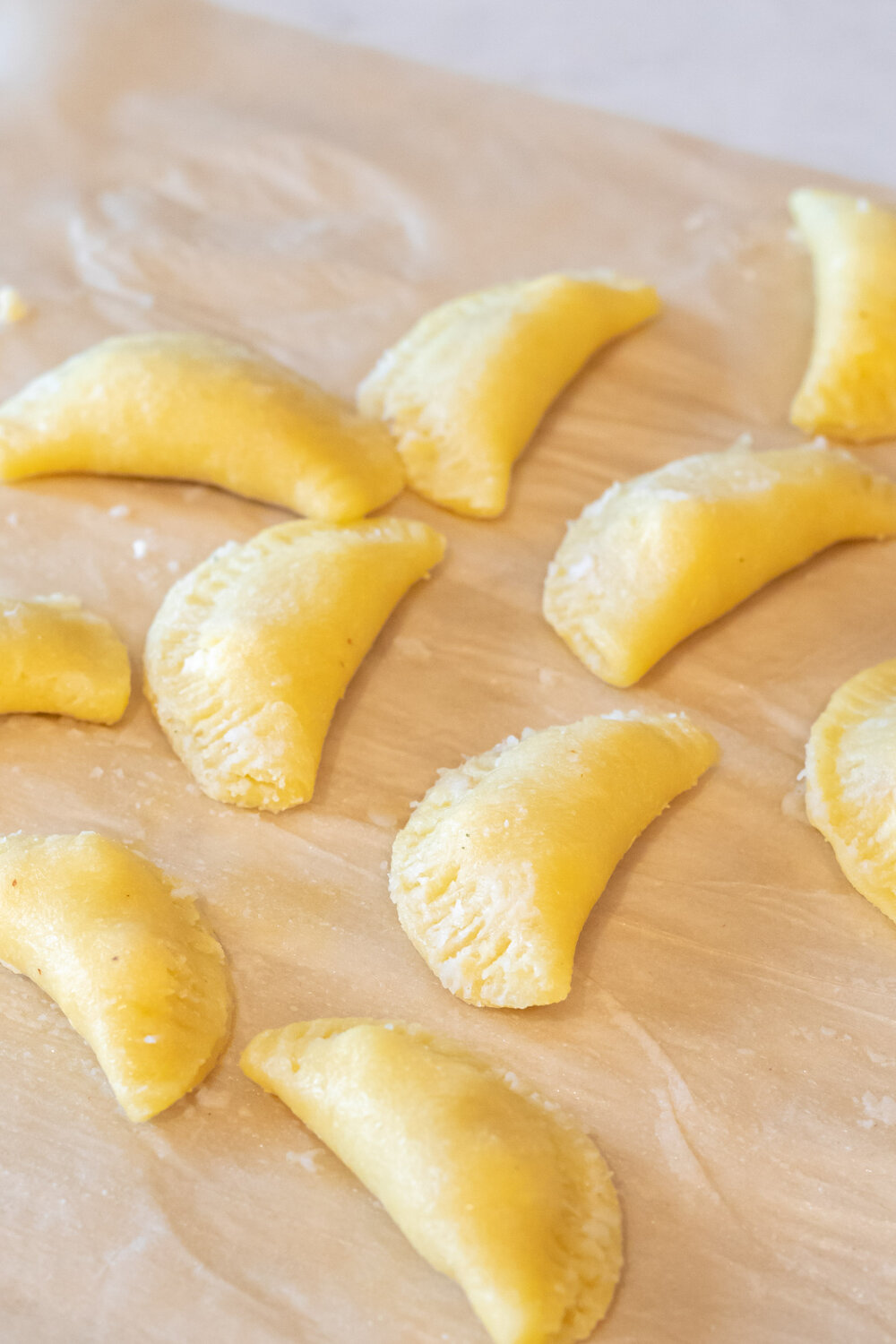 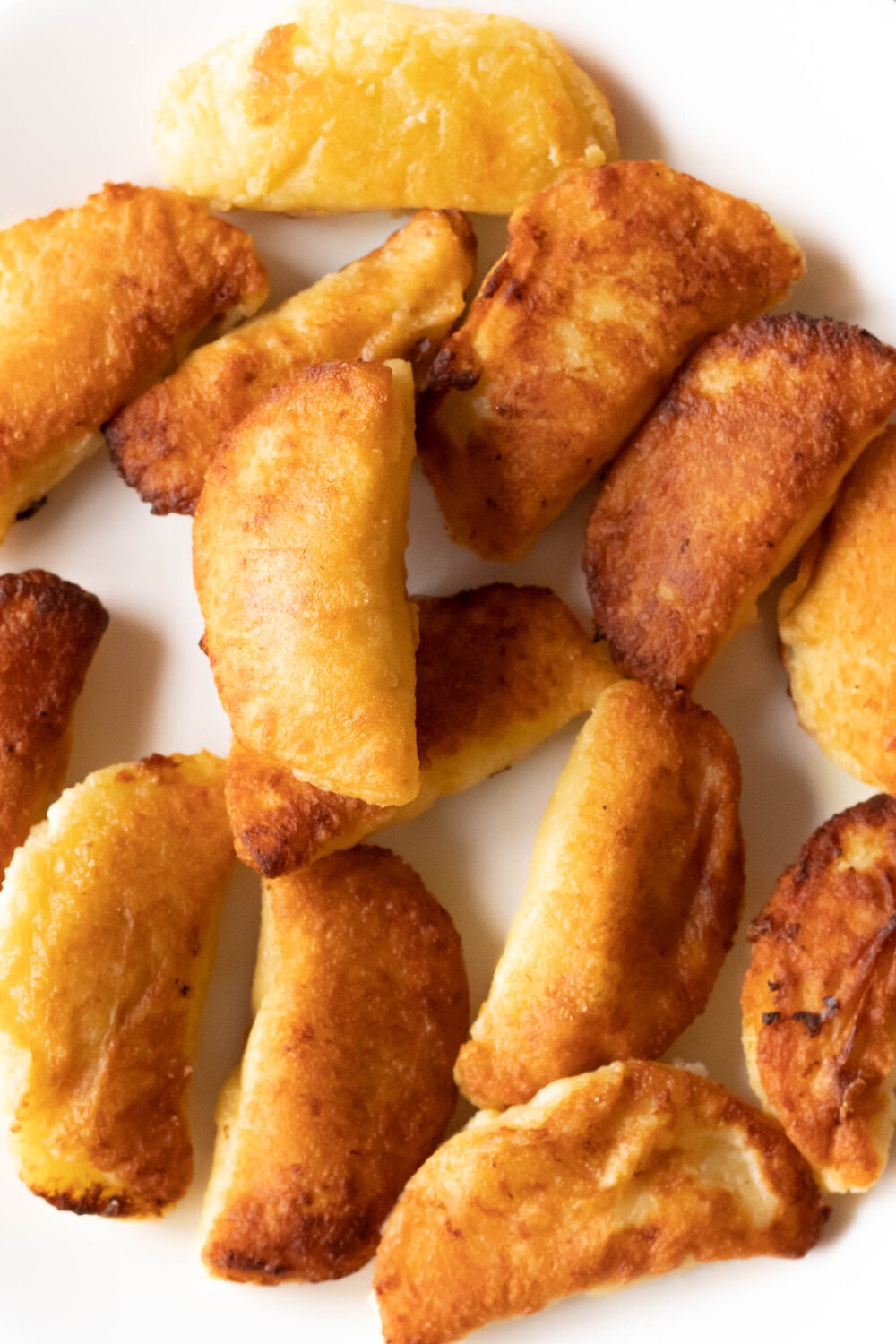 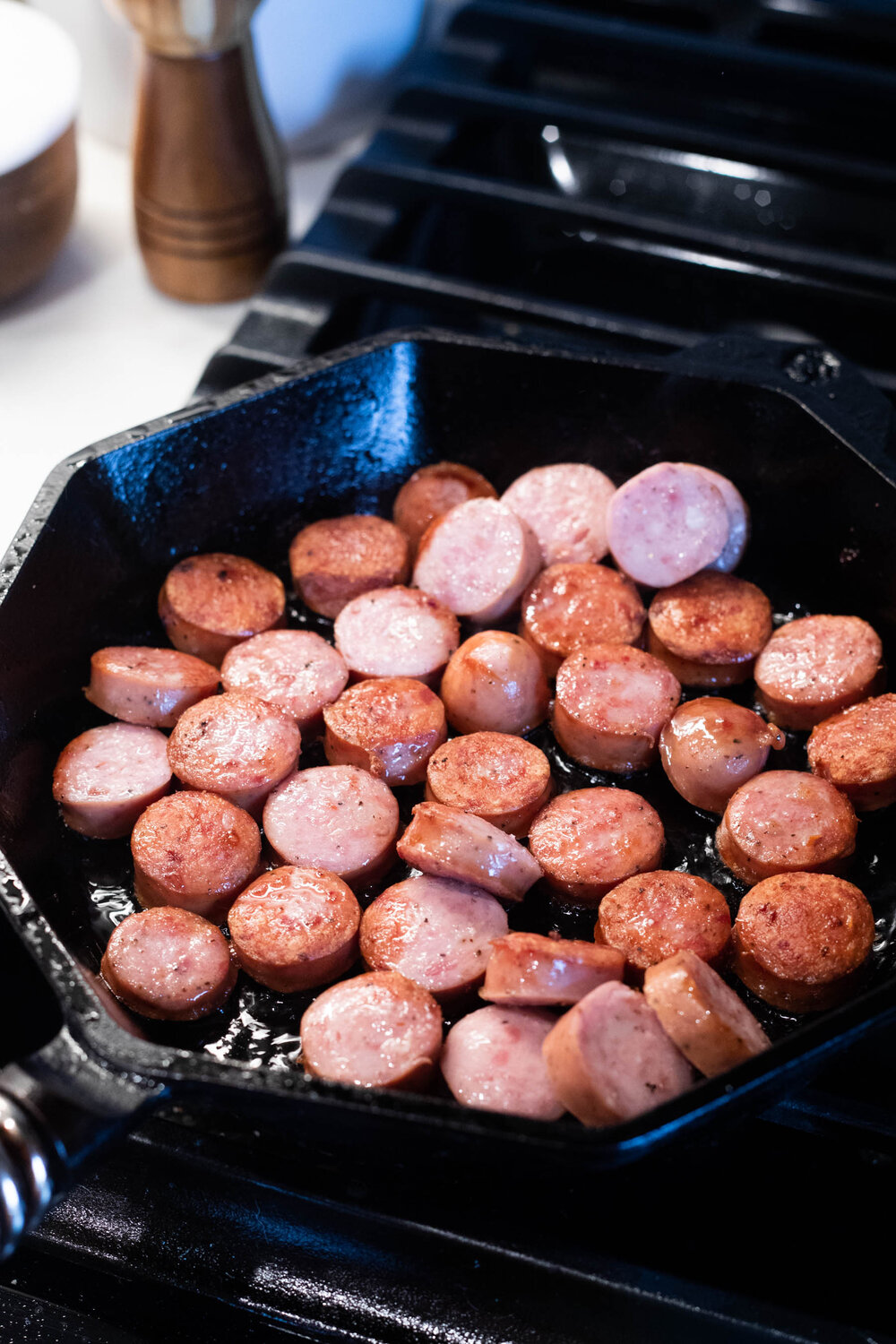 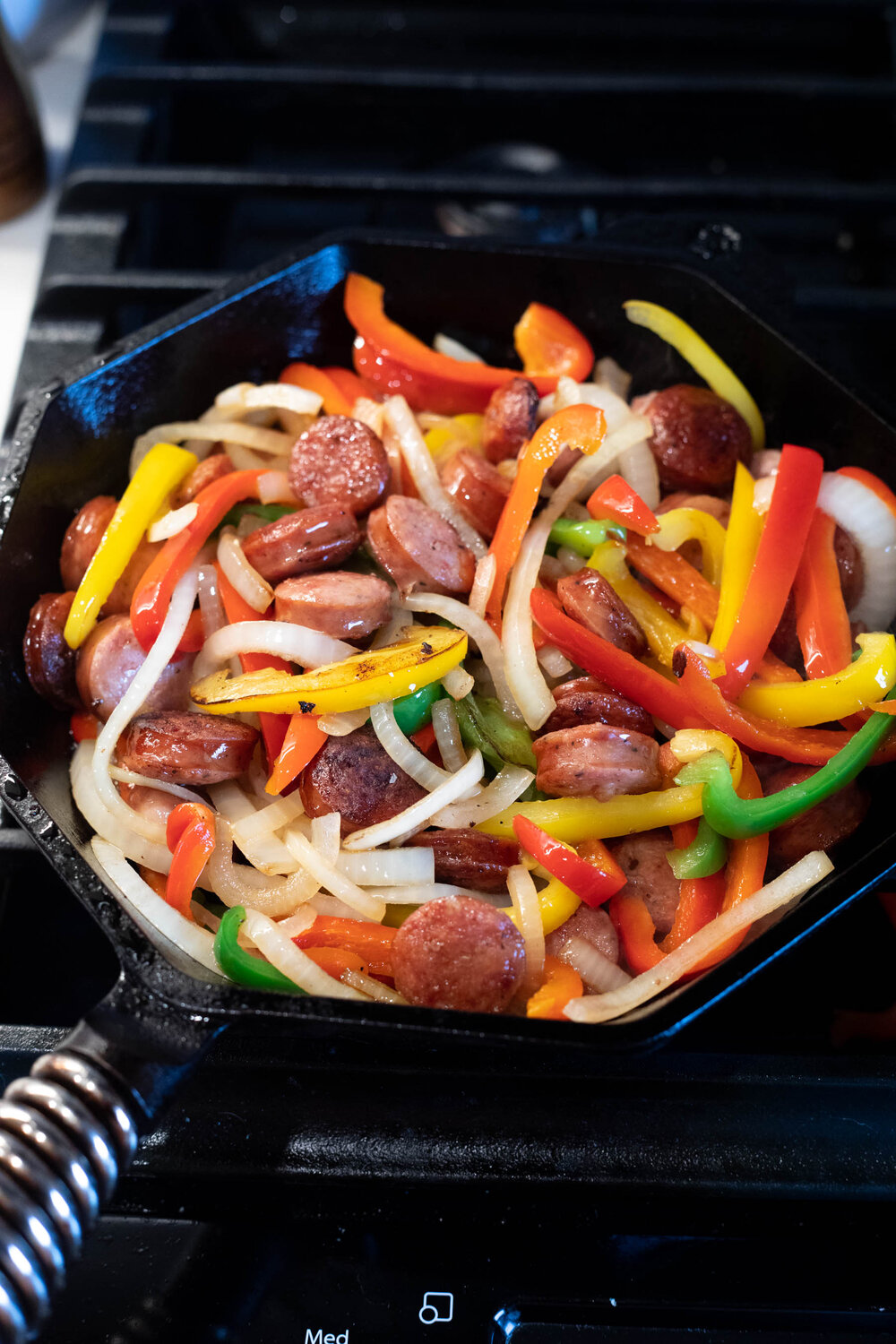 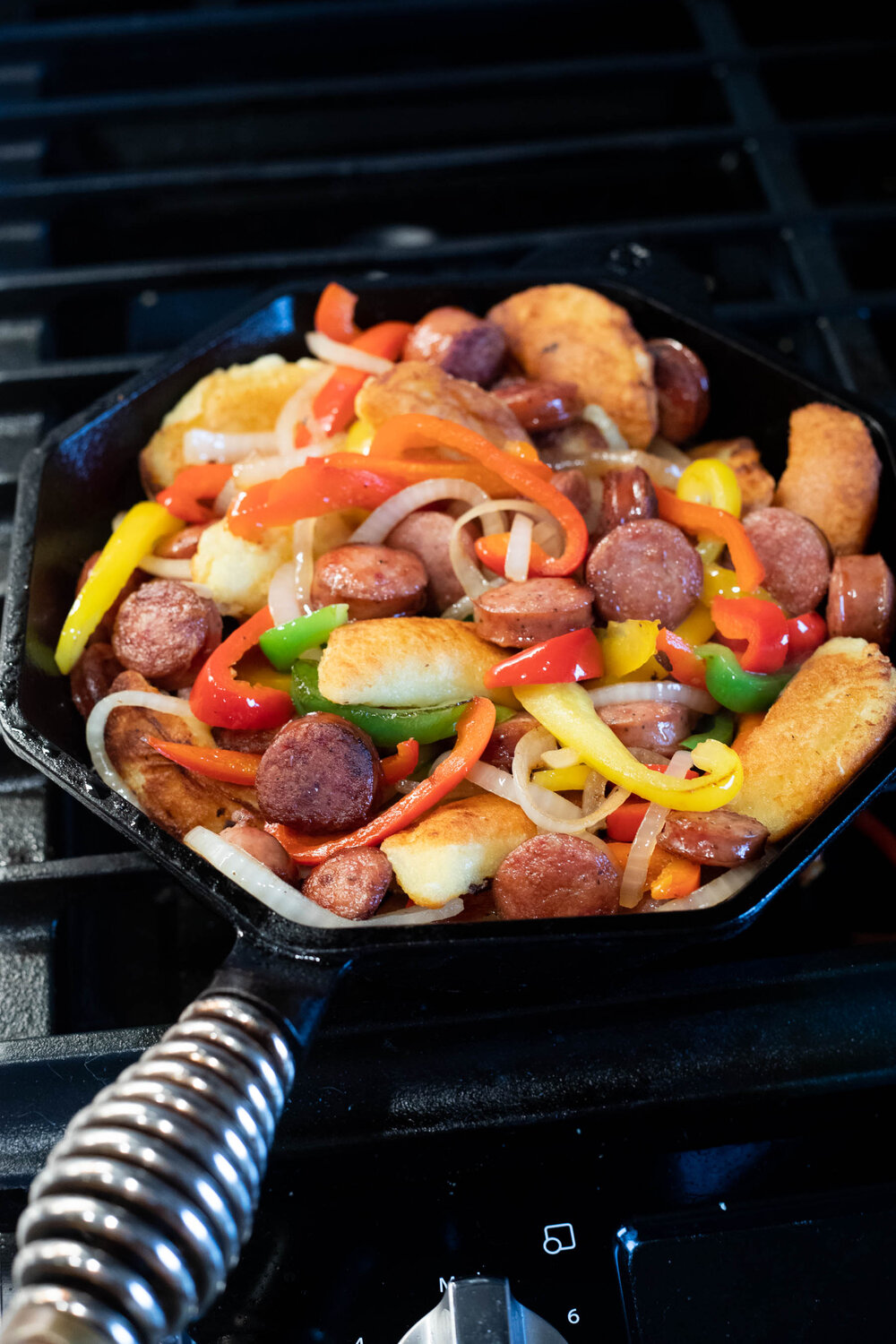 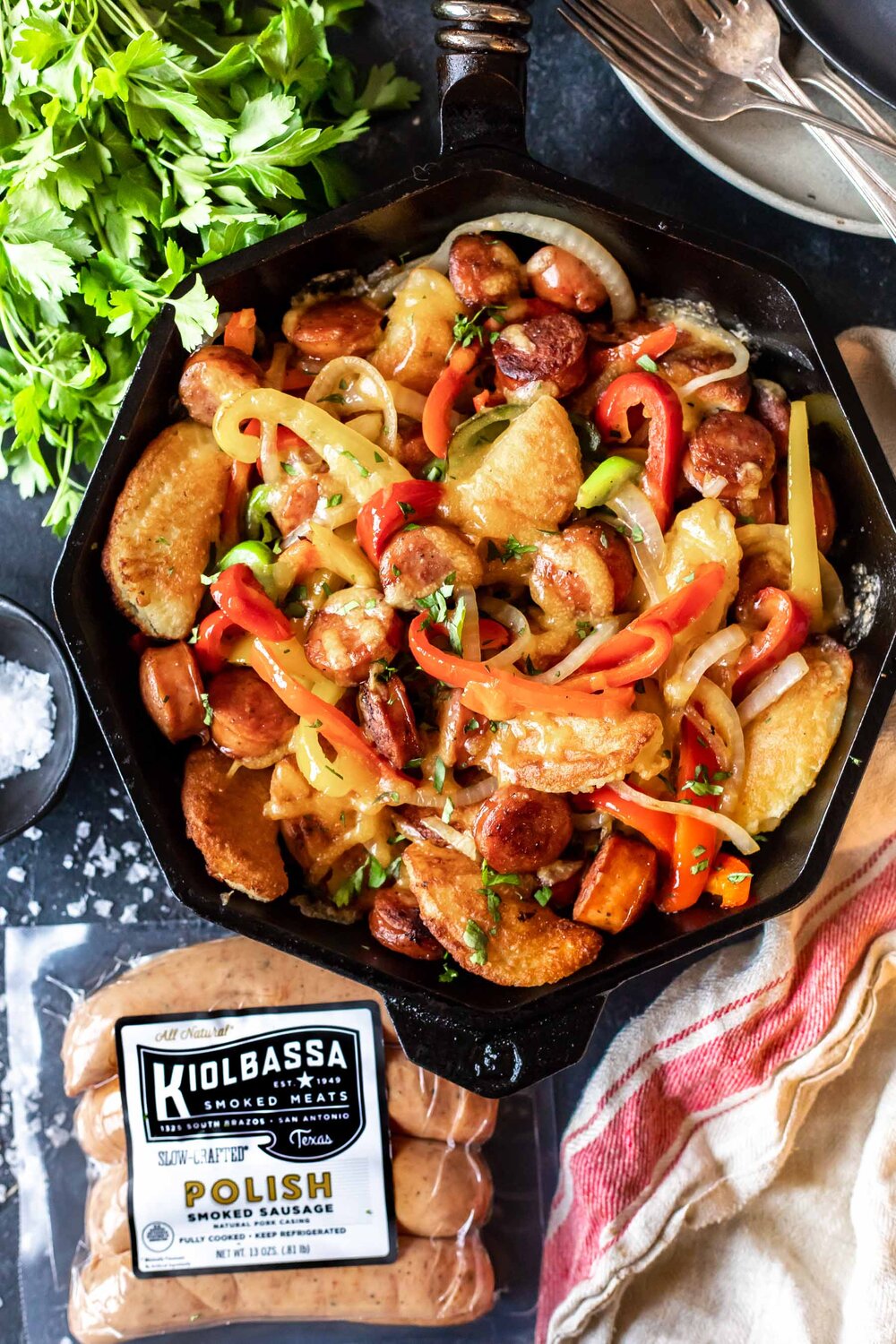 Now just grab a fork and dig in! This is seriously one of the best recipes on CIK! We just can’t get over how good it is! 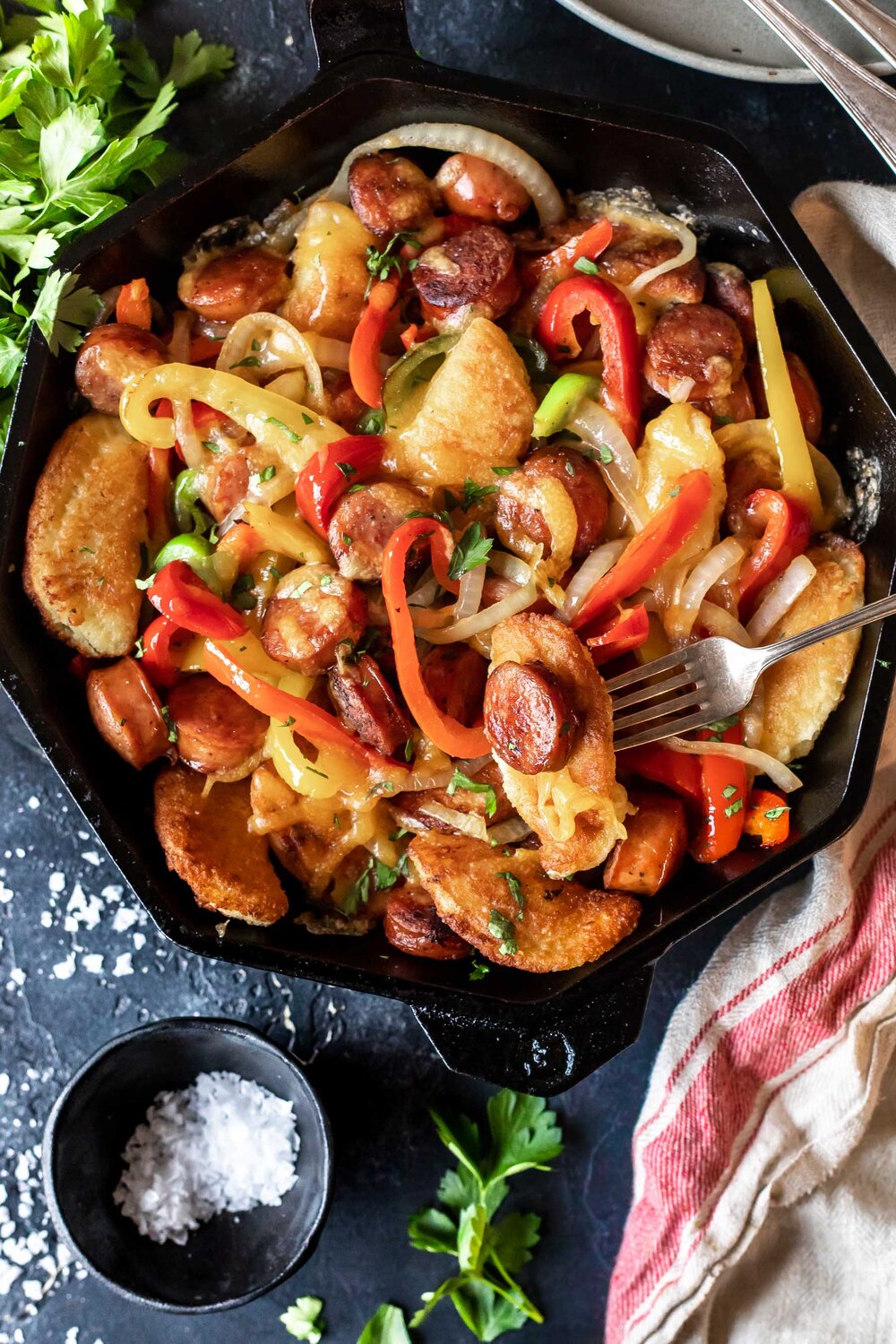 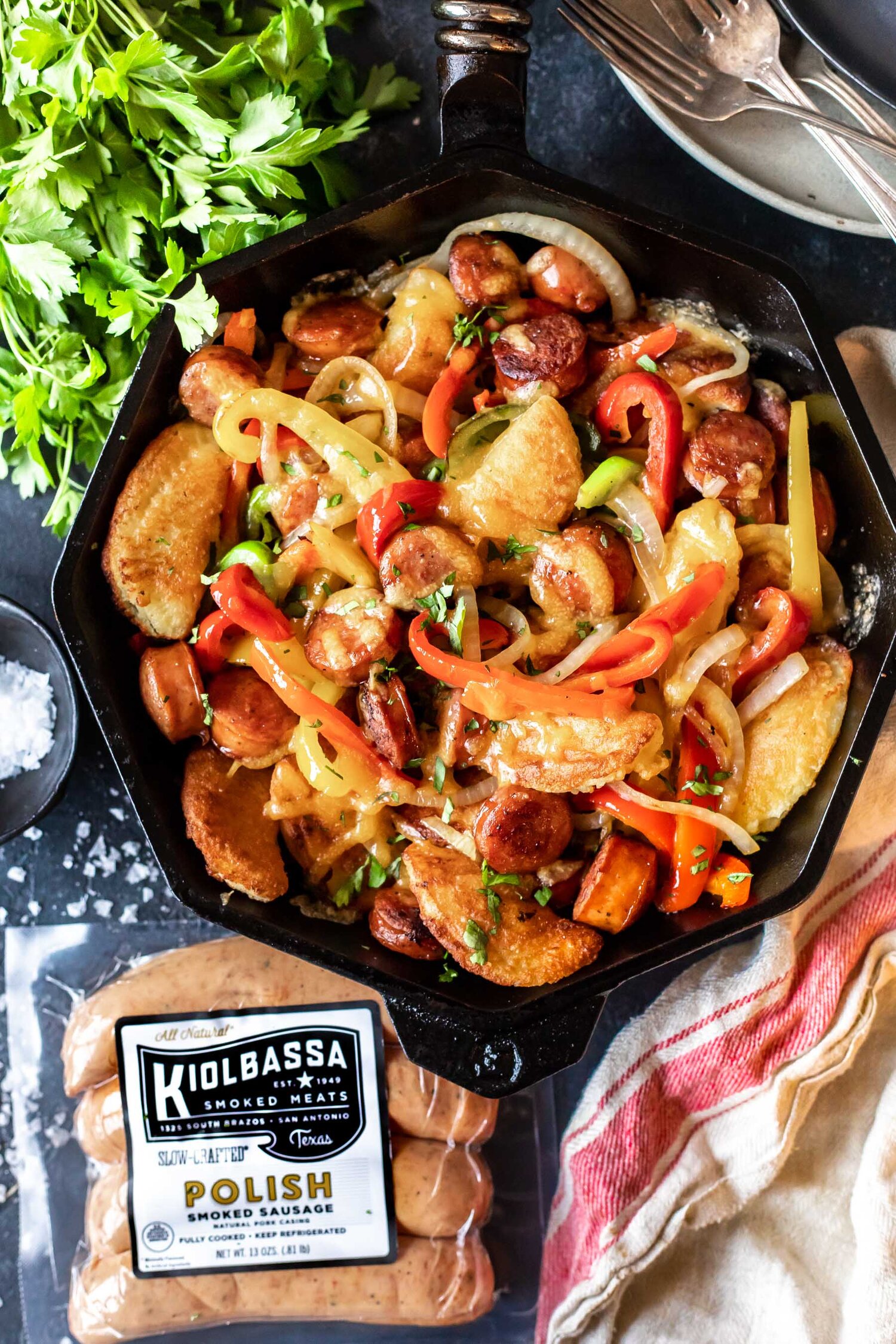 For the Pierogi dough:

For the Pierogi filling:

We find keto recipes for you all across the web. Enjoy and share with your friends!